Someone recently commented on a recent post of mine that got me thinking about bad reviews.

I had just posted that I took the train from LA to Seattle.  I had a great experience.  Someone posted that she loved the train until she had a bad experience with an verbally and physically abusive train conductor.  While I don’t negate her experience, I wondered what happened.

I’ve noticed that when people leave a bad review, they rarely tell how they really handled the situation.

When I was taking the train last month, a situation happened.  I was in business class and the seats at the back of the train were unoccupied.  I was sitting in the middle of the train car.  No one was sitting beside me.  The train made a stop and a women got on the train.  She went to the unoccupied seats in the back.  A woman that worked on the train told her that she couldn’t seat there because those seats were reserved for the crew members.  The seats weren’t marked.  The woman wanted a window seat and moved the belongings of another person that had gone to the bathroom who was sitting in the seats behind me.  When the woman got back to her seat from the bathroom, she told the woman that she wanted her seat back because she originally had her belongings in the seat first.  The woman told her that there were no assigned seats on the train, with an attitude.  The train conductor came by and asked what was going on.  The woman that had moved the belongings of the other woman got very loud.  The conductor didn’t raise his voice and neither did the other woman whose belongings had been moved.   The woman whose belongings had been moved just moved to another seat but she didn’t have a window seat anymore.

When every thing had calmed down, the woman behind me started calling some one on her cell phone and having a loud conversation.  I tried to tune her out but she was so loud.  She was telling the other person that she was going to complain and get her money refunded.  She told the person on the phone how the conductor had been very rude to her.  She called another person and told the same story.

Not one time during those conversations did she tell those people that she had moved someone else’s belongings and that she was the only one to raise her voice and get loud.

My opinion of the situation was that the woman who moved the belongings was the one being rude and loud.  I do agree that the crew members should have had a sign up to block off the seats in the back.  Two wrongs don’t make a right. Just because those seats weren’t marked doesn’t mean that she had to move someone else’s belongings.  The next time that I took the train there was a sign placed on those seats marking them for crew member use only.

I liked the fact that the train conductor and the woman whose belongings had been moved didn’t get loud and rude with the woman.

Just because someone is mean or rude, doesn’t mean that you have to treat them like they are treating you.

The two times that I took the train, I had a great experience.  I loved the views and the crew members were nice to me.  Following are my most favorite pictures from my train rides. 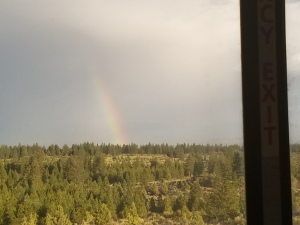